Understanding the Behavioral Health Landscape of 2016

In this Provident Perspective, we will cover a sector that has seen unprecedented interest and growth over the past ten years.  Behavioral health is a diverse sector, comprised of several disparate subsectors ranging from substance abuse to brain injury.  While the industry is vast and segmented, Provident has aligned our efforts to the following subsectors:

Growth and Investment in the Behavioral Health Industry

Each of the above listed subsectors could further be split by age group (children/teens/adults) and treatment modality (inpatient/outpatient).  As such, no company truly has a national presence in every behavioral health space, but rather finds opportunities specializing typically in 1-3 related subsectors.  Although behavioral health has truly been in vogue to investors for the past 7 years or so, each subsector has experienced varying levels of growth and investment over the same timeframe.

The focus of this commentary is on both the I/DD and substance abuse subsectors, due in large part to the demand from both strategic and financial sponsors for investment.  Autism related facilities, a niche within I/DD, has risen to the top of many investors’ wish lists, and we are seeing a meaningful transition from high end substance abuse treatment centers toward more accessible intensive outpatient and medication assisted treatments.

The I/DD space is perhaps the most in-demand behavioral health subsector, primarily due to services related to Autism Spectrum Disorder (ASD).  Favorable reimbursement trends as a result of the Mental Health Parity and Addiction Equity Act and public recognition of ASD thanks to organizations such as Autism Speaks have dramatically increased the coverage for treatments throughout the nation.  Some states, such as Massachusetts and Michigan, have mandated by law that commercial insurance companies provide coverage for Autism diagnosis and treatment.  Forty-three such states have enacted some form of Autism insurance mandate, with Ohio the one state working on reform as of yearend 2015.

Companies operating in one of the forty-three reformed states are the most favorable investment targets from an investment standpoint.  Epic Health Services, a former client Provident represented in their recapitalization with Webster Capital, bought Clarity Service Group, based in Pennsylvania, early in 2015.  Pennsylvania reformed Autism coverage to require private insurance companies to pay up to $36,000 per year for diagnostic assessments and treatment of individuals under age 21 with autism spectrum disorders.  Clarity offers family services such as autism, applied behavior analysis, behavioral health rehabilitation, and early intervention services to children in schools, homes, and community based settings, and thus was in a prime position for growth after the law went completely into effect in 2010, making it a prime target for investment.

The gold standard for Autism treatment is applied behavior analysis (ABA): a customized, well researched, systematic treatment plan for both the 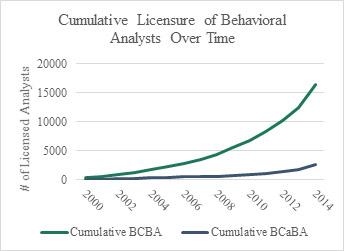 learner and his or her family.  The Behavior Analyst Certification Board (BACB) is a nonprofit organization formed in 1998 to create a widely recognized credential for behavioral analysts and practitioners of ABA – the Board Certified Behavior Analyst (BCBA) and assistants, or BCaBAs.  Provident maintains a number of relationships with ABA providers throughout the United States, and there are two common threads we see among the top providers: a lack of quality BCBAs to hire and subsequently long “class” waitlists, often up to twice the capacity of the service offering.  Through data Provident has obtained from the BACB, a clear picture of the exponential growth in both BCBA and BCaBA accreditation emerges, as illustrated in the chart above.  Finally, in October of 2015, the BACB released a workforce demand report conducted by Burning Glass noted a near tripling of job postings from 2012 to 2014 for credentialed behavior analysts.  The demand for these providers further cements the notion that demand for these services is growing rapidly and the organizations that are poised to meet the demand will be in a very sought after position.

Given the relative youth of these markets, the number of sizeable platforms in the space is small, though growing quickly.  Many of the largest companies, such as Universal Health Services, Civitas (parent of the Mentor Network), and Pathways Health, offer treatment services for ASD, but have up until now focused on other disorders that have long been reimbursed by Medicaid or commercial insurers.  By most estimates, no single company services more than 5-10% of the addressable market.  As such, the fragmentation in this market is leading to opportunities for strong providers to grow statewide and regionally via acquisition and de novo expansion.

Provident expects practices treating ASD to be among the most active M&A areas over the next few years.  For providers of appropriate size and scale today, valuations are rich due to a supply and demand imbalance.

The substance abuse and addiction subsector has experienced a tremendous amount of investment activity over the past 3-4 years, due in part to the Affordable Care Act’s requirements of most health plans to cover substance abuse services.  The initial wave of transaction activity centered on largely self-pay or out of network, “luxury” inpatient rehab centers.  Valuations reached premium levels as demand soared for substance abuse centers catering to wealthy clients that were able to pay out of pocket and remain in these sober living environments for a month or more at a time.

As we move into 2016, the investment environment has changed.  Although demand is still prevalent for well-run, self-pay and out of network facilities, other models are coming into favor.  Intensive outpatient programs have had success in contracting with commercial insurers as alternatives to expensive inpatient programs.  Patients gain the benefit of being able to largely live life normally such as keeping a job and being surrounded by family, while still having the amount of contact with counselors necessary to minimize the likelihood of relapse post-detox.  Since these programs cost substantially less than inpatient treatment, a much larger market of patients exists that can take advantage of these treatment programs.  Along with this shift, Medication Assisted Treatment (MAT) is combining many aspects of the outpatient model with medication designed to keep individuals from relapsing.  Treatments such as Suboxone and naltrexone are becoming more prevalent versus buprenorphine and methadone alone.

Despite the shift away from expensive, high-margin providers, Provident still anticipates strong demand for substance abuse centers going forward.  The largest strategic players in this space are AAC Holdings, Acadia Healthcare, and Universal Health Services – which have all grown via acquisition.  UHS made their initial platform investment in September of 2015, with their acquisition of Foundations Recovery Network.  In addition, private equity sponsors continue to make inroads in the space, most notably with Kohlberg & Company’s recapitalization of Sunspire Health.  While the shift toward in-network reimbursement has depressed profitability, the transition to a model closer to “traditional” physician services has decreased reimbursement risk, thus increasing the multiples for these companies.

Despite the few number of large operators, there are undoubtedly significant opportunities in the behavioral health industry, as, the magnitude of fragmentation in the market is staggering.  Provident will continue to be monitoring ongoing developments in the space, and we always welcome input and other perspectives.  Feel free to contact us anytime to discuss the industry drivers or our work in the sector.